November 12, 2013
My husband got a promotion at work last week, so I made him a fun card to celebrate.  He has always admired both Punch Art and the Pop Up cards, so I knew from the first moment that I wanted to incorporate both of these.  This was a real labour of love, it took HOURS of snipping and Google-imaging to get accurate pictures of the New Zealand Police uniform and cars and then transfer them onto paper (I am no artist!!!), but I love how it turned out. 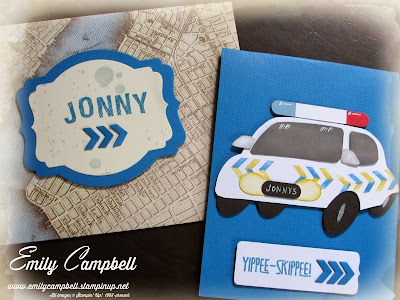 The envelope is made with the new Envelope Punch Board and Soho Subway DSP - I love being able to customise the envelope to match the non-standard card size.  I stamped hubbys name onto a label made from the Deco Labels Framelits, and added the "Sergeant Stripes" which were made with the Circle Card Thinlets Die set.  The car's body, windows and wing-mirrors were hand-drawn and hand-cut, the tyres are Large Ovals and the siren and registration plate use the Word Window punch.  The headlights are wings from the Bird punch.  I've used both the white gel pen and the white chalk marker to highlight and add details.  The Police decals are stamped from the Tape It stampset, and I used Crushed Curry and Pacific Point markers to alternate the colour-way.  The Yippee-Skippee sentiment is stamped onto a label from the Chalk Talk Framelits, and I repeated the chevron arrows from the envelope.

Inside the card I used the Pop 'N Cuts Dress Form insert to create the stand for my Police Sergeant (note: I hadn't drawn the Sergeant Stripes onto his shoulders yet when I took this pic).  I decided I wanted a plain square-edged card-base for this card so I used the insert without the card base - you might be wondering how I did this - the sandwich contained two cutting plates and a shim on the bottom (the shim was the thick cardboard backing from a pack of Glimmer Paper), then the Dress Form insert, cardstock and 1 top cutting plate. 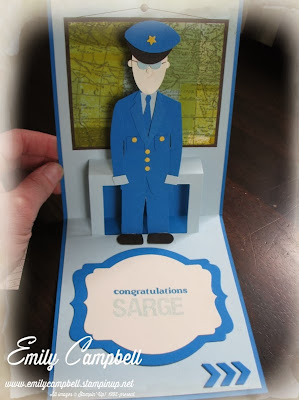 I then used the Tuxedo template from Karen Burniston for the Police Number One's, and I adapted the lapels to suit, and I added the tie, pockets and gold buttons.  The hat is made by double-punching the Extra-Large Oval - the star (which is NOT true to the actual NZ Police uniform :o ) and buttons are the only non-Stampin' Up items used for this whole project.  I have used Pacific Point and Soft Sky as my main colours. 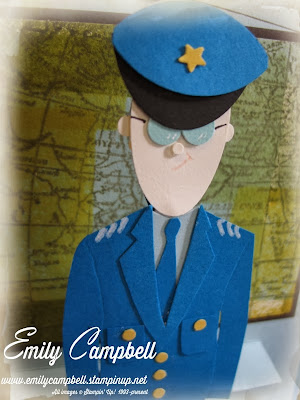 This time you can see that his Sergeant Stripes have been drawn on with the Chalk Marker.  The picture hanging on the wall in the background is the World Map stamp and I used the tutorial from the Annual Catalogue for the inkpad-to-paper colouring technique (colours are Soft Sky, Pear Pizzazz, Summer Starfruit, and the image is stamped in Always Artichoke).   I used an Early Espresso Candy Dot as my 'picture hook', I contemplated using linen thread to hang it, but in the end I just used my Marker.

I hope you've enjoyed this project, it certainly was fun to make! 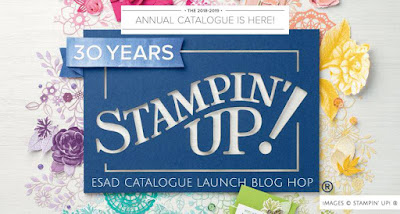 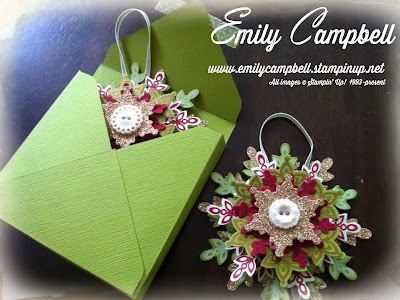